If you follow my blog, you know I witnessed a skunk killing one of my hens a couple of nights ago.  I also noted that I suspected that one of the two pullets she was raising was also missing in action.  Sadly, I found the remains of the little chicken, as well as a second brood hen, that I had hoped was sitting on a clutch of eggs, under a clump of raspberry bushes, where they had been they had been dragged, and partially eaten. 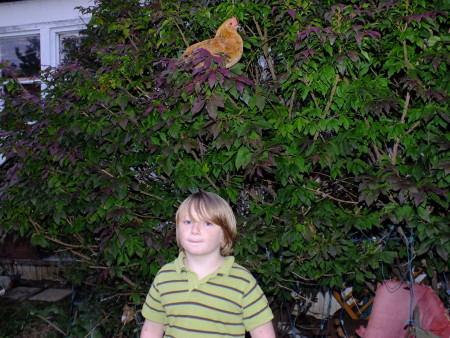 This little chicken, less than 24 hours after the hen that hatched it, and its brood mate were killed by a skunk, has found safe refuge high in a shrub. A sure sign of good survival instinct!

The other young hatchling should do just fine.  Last evening, just before dark, I saw the bushes along our trailer moving, and looked up and saw the little chicken going to roost high in the branches of the bush.

Yesterday I set two live traps hoping to reduce the number of skunks in my neighborhood.  We have three cats, and several chickens so finding bait that will catch a skunk, and not catch a cat or chicken can be difficult.  Yesterday, I used peanut butter.

Peanut butter is an AWESOME bait for many nuisance critters, especially rats, mice and squirrels, which are famous for learning how to steal bait from traps.  Just the smallest dabs of peanut butter will leave behind deliciously scented oils, and that is all you really need to attract a peanut loving critter.  I always smear it on the bottom of the bait tab, or trap trigger.  I rub it in so long, that almost no solid clumps of peanut butter remain.  It all melts into oil.  The animal will follow the scent, and search very hard for the reward its nose is telling them should be there, and will most definitely trigger the trap before it can escape.

It worked really well at my place last night, because both traps held skunks this morning.  The larger of my two traps held a small skunk, likely born this year, and the smaller trap held a larger skunk.  Likely a year or two old.

I posted a somewhat prophetic blog back on the  on 10/02/15, how to deal with skunks in your yard, and I followed my own advice carefully.  I approached the trap that held the smallest skunk very slowly, with a blanket held high to cover me should the little stinker let loose.  Typically it is the youngest skunks that will unleash their best defense, because they are fearing for their lives! 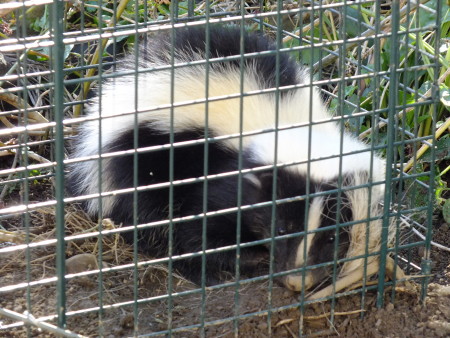 A cute little skunk, caught in a big live trap. If you don’t have chickens, or nosy dogs, skunks in your yard aren’t really a bad thing. In fact, that are one of your best all natural defenses against Japanese beetle grubs!

This little guy just curled up into a little ball, and tried to hide under his luxuriantly fluffy tail, so I dropped the blanket over the trap, picked it up, and placed it on the cargo rack of the van without incident.

The second skunk was too big to move around much in the trap, and most certainly couldn’t raise its tail to spray.  All the old timers will tell you that a skunk cant spray if it can’t raise its tail.  I didn’t even need a blanket to cover the trap, but being a creature of habit I took one anyway.

For some reason, the idiot who placed the smaller trap placed it under a raised hutch that I use in the springtime to house my newly hatched chicks.  I placed the trap there, because most of the time when I accidentally walk up on a skunk in the yard, that is where it runs to hide.

Keeping the blanket raised over my head to shield me should the skunk manage to spray would be impossible, because there simply wasn’t enough space under the brooding hutch.  So I just squatted down, reached out over the trap with the blanket, and dropped it all in one swift movement.

As soon as the blanket dropped over the trap, the skunk sprayed.  Lucky for me, I don’t always believe the things the old timers say, and that I am a creature of habit!

I got the traps loaded onto the roof of the van, and we headed to a wooded area along the shores of Pleasant Lake (aka Stetson Pond, or Snake Lake) where I know there is an abundance of apples, acorns, and marshy areas full of snakes, frogs, worms and slugs, that should feed plenty of skunks.

I decided to release the biggest skunk first.  So I got the trap off the roof of the van, and headed for a trail head to release the skunk far enough away from where we were parked so the skunk wouldn’t feel threatened. 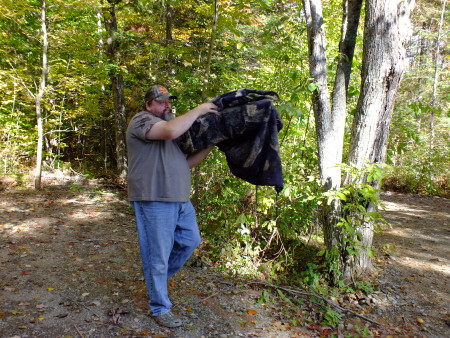 Once a live trapped skunk has a cover over it, you can move it about without fear of being sprayed.

Releasing a live trapped skunk is something that always fills me with dread.  You just never know what they are going to do once they are free.  On more than one occasion I have had them charge me with their tails raised, and then stop in front of me to dance on their front paws.  That is the final warning a skunk will give you, if any, that they are about to spray.  The best thing to do in that situation, is to stand statue still until the skunk is back on all fours, and then you walk very slowly backwards, putting as much distance as you can between you and the skunk, and pray that it take the opportunity to do the same!

One thing is certain…Once you have opened the trap, it is going to take quite a long time for the skunk to vacate the space it has now determined to be a safe haven.  In the daytime, a skunk wants to be where it is dark and enclosed.  It really isn’t interested in being out in the bright sunshine. No matter what Walt Disney would have us believe, you are not going to find bashful little skunks frolicking about in a meadow of wildflowers. 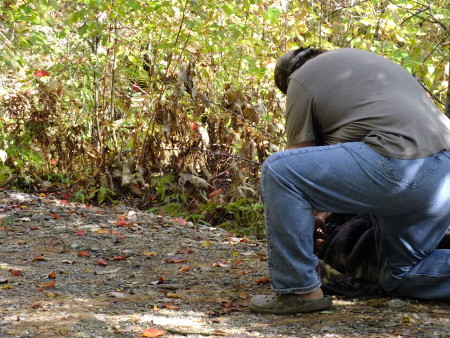 Opening the door of a live trapped skunk can be a tense moment. You never know what they are going to do. This one burst out through the door of the trap just a second or two after the trap was opened.

Once I got the door of the trap open, I reached for the little rod that holds the door open when the trap is not set, and the skunk burst out through the opening like he was being chased by a pack of dogs or something!  (Likely he was trying to get out of the stench he had let loose earlier!)  I was in complete shock!  Never has a skunk done that, and I have trapped and released well over two dozen skunks in my life time, probably the number is closer to fifty.  And almost always they need to be coaxed from the trap!

Then I set about releasing the second skunk.  I suspected the larger of the two was the small one’s mother, so I took the second trap to the same location, thinking the little one could find its mother’s scent, and meet up with her somewhere in the thicket.

Like most skunks, the smaller one took its time coming out of the trap.  I exposed a good portion of the trap’s entrance, so the skunk could see that it was open, set the rod to hold the door open, and stepped back out of the way.

After a minute or so, the little skunk ran out through the opening, and as I suspected, caught the scent of the larger skunk, and ran right into the open trap next to it!

That was another first!  I went over, and slowly exposed more of the trap to the sunlight, and rattled the trap a bit, and soon the little skunk exited the trap, and headed off into the woods.

This afternoon, I reset both traps with peanut butter again.  I don’t know how many more skunks  I am likely to catch, but one thing is certain, I have already discovered that peanut butter is not a good bait to use, if you don’t want to incidentally trap chickens.  The trap had only been set for 5 minutes, before one of the old laying hens had gone in to eat the peanut butter!

We shall see what dawn brings!  In the mean time, I have to ponder new bait options!  I bet lollipops would work!