The goats have been getting a little harder to round up these days, so I took a ride to the farm I had stopped at last summer, where I had bought some special goat herding equipment.

When I pulled into the barnyard, a farm hand walked up and asked if he could help me. I told him I had purchased a “HEP!” Pole from the owner last summer, and asked if there might be a couple other ones for sale, because I wanted one for my wife, and another for my boy.

The hand scratched his head, and wrinkled his brow, and had a kind of confused look on his face.

I told him it was the old guy that was having the farm sale last summer. He had a bunch of antique gears, and hoses from old tractors, some  warped vintage boards from one of the first houses with running water, some antique nails in classic coffee cans, and other cool stuff like that.

He scratched his head some more, and said he better go check with Fred to see if he knew what I was talking about, and he walked off into the barn.

Before long, the hand, and Fred walked out the door of the barn. Fred looked a little confused too, until he saw me, and then his face lit right up!

“Ah yes! Mister Alley! Of course! Good to see you! I know just what you’re looking for, but I am afraid you confused my man Charlie here. See what threw him off is when you asked him for “HEP!” Poles!!!! Oh my goodness! No, no, no! Not “HEP!” Poles, but “HEP!” Sticks!  A “HEP!” Pole is something else all together! Has to do with a hay braiding machine, and we aint got nuthin like that around here, anymore!  Of course I have “HEP!” Sticks! How many wuz-ya lookin fer?”

I told him I had to have two of them, one for Jen, and one for William. He said that wouldn’t be a problem. He turned to his hand, and said in a voice that made me suspect his hired hand might be kind of special. You know… one of those big guys that aren’t so bright, but nice enough and hard workers?

“Charlie, run on out back there in the shed, and grab me a couple of them “HEP!” Sticks…You know…Over with the skis, and the snowshoes??? “Those “HEP!” Sticks?  I think there is a couple of red ones hanging there next to those broken skis.”

Fred grabbed a thermos from the tailgate of his truck, and poured himself a cup full of coffee.

I says to Fred, “Poor guy isn’t very bright is he?”

Fred says, “Well, he might not be so bright as some fellers, but he’s a mite brighter than some others!” He winked at me, and punched me in the arm a lot harder than I figured an old guy like him would be able to do.

He saw me wincing and said, “Oh! I didn’t mean to hurt you there bub! Sorry about that!  All them years of braiding hay with a “HEP!” Pole made me stronger than I realize!” and he gave me another wink.

Charlie came back with the “HEP!” Sticks, and handed them to Fred. Fred told me that since I was such a good customer, he would let me have these ones for the same price, each of course, as I got the last one for. He looked them over from end to end, and told me normally, these particular ones he had were twice as much, but he liked me!

He handed them “HEP!” Sticks to me, and I looked them over, and they were in deed fine pieces of equipment!

I gave him the money, thanked him, and left before he could change his mind.  I looked back in the rearview, and Fred must have been choking on his coffee still, and it must have scared Charlie pretty bad, cause Fred was doubled over with his hands on his knees, and it looked like Charlie was crying, and smacking Fred on the back.  But they both looked up, smiled and waved as I drove away.

So now I have THREE “HEP!” Sticks, one for me, one for Jen, and one for William. Those goats best wise up if they know what’s good for them! 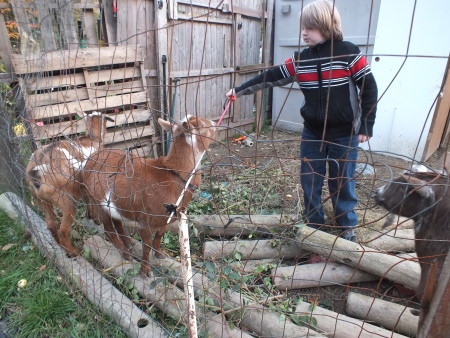 William using his “HEP!” Stick to keep the goats away from the door of the goat proof fence, after we brought in some fresh brush clippings for them.