Have you ever been sitting in the living room watching TV, only to have your eyes and nose assaulted with the smell of very close, very fresh skunk?

You determine that nobody in the household has actually been sprayed, yet the overwhelming smell has filled your home. What do you do?

Well out at my place, just before dark, I heard skunk activity in the yard. Earlier this fall I trapped, and relocated three skunks in the course of two nights.  Either they had already made the two-mile journey home, or I had missed a few!

I got outside, and I saw two of them squabbling over something that was lodged in the fence…Apparently one of my chickens had gotten stuck in the fence earlier in the day and had died.  The skunks had found an easy meal.

One of the skunks decided I was too close for comfort, and ducked into a hole in the skirting.  I immediately placed a live trap along his path to the dead chicken

The second one was much harder to drive off…So hard in fact that I couldn’t drive it off, no matter what I did. So I boxed it into the corner it was in as best I could with some particle board, and set a live trap next to him…and by next to him, I am talking within a foot of him, without getting sprayed.

if you zoom in between the skunk in the trap, and the pane of glass, you will see a second skunk behind the lattice fence.

While I was doing that, I heard the first trap, on the other side of the fence snap closed.  I had already caught the first skunk!

At this point, the second skunk would have a hard time getting around the trap, and hopefully would simply walk into it. Since the trap was already set, and since I had a lattice fence between me and the skunk, I decided I would watch him for a bit. Soon he was full from his meal of chicken, and set about trying to get out of the corner I had boxed him into. He stuck his head in the trap a couple of times, but wouldn’t go in. 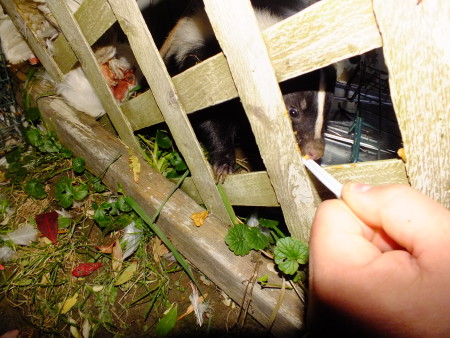 In these pictures, I am behind a snow blower that is partially visible on the right side the first picture of the trapped skunk.

Initially, I wanted to bait the trap with some peanut butter, but now  I didn’t have a way to get to the bait pan in the trap, without taking down the wooden partitions I had placed. I hadn’t baited it before I set it, because I was trying to set it quickly, and I was counting on the skunk just fleeing the area, by way of the live trap, like the first one had. 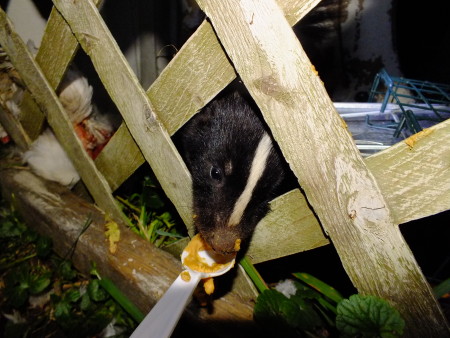 So I did the next most logical thing. I got down on my knees with a jar of peanut butter, and a plastic spoon, and I fed the skunk. I mean what else could I do???

After I snapped a few pictures, the novelty of feeding peanut butter to a skunk wore off, and I decided to head into the house.

Soon I went to bed, and had forgotten all about my black and white stripped friends out in the yard. It was nice and cold in my room, and my blankets were warm, and I was ready to sleep. I was happy, because there was no reason to get up in the morning…

But at 3 am I was sure I was going to vomit, my eyes burned, and tears were streaming from them. Something had scared a skunk very close to the house.

I had the bedroom window open, so I sniffed the cat that was lying next to me, to see if he had been sprayed. Nope! Thankfully the other two cats also passed the sniff test.

I went outside, and breathed in the fresh frosty autumn air, and was surprised that I couldn’t smell skunk at all! My friend in the live trap was sound asleep with his tail over his nose. His buddy on the other side of the fence had found his way out of the crude obstacles I had placed in his way, and was off doing skunk things. Likely he was the one who sprayed, but there was no sign of him.

I walked into the back yard, all I could smell were goats in the goat pen, dogs in the dog pen, and the frosty woods all around me.

I was puzzled, but I was getting cold, so I headed back to the house. I opened the front door, and it hit me again, and it was almost as bad as the initial shock that tore me from a deep sleep…Fresh, close, powerful skunk!

The whole house reeked! I had all I could do to keep from vomiting. I went on-line, and found a tip from www.bobvila.com it said to fill containers with vinegar, and place them around the house.

I wasn’t sure it would be that easy, but I figured the only thing I had to lose was some vinegar, and hopefully the stench of skunk…So I filled six 16 oz plastic cups, and placed them in various skunky locations, and by the time the last cup was filled, and placed on my son’s bookshelf in his room…THE SMELL WAS GONE!!!  Not just masked by the smell of vinegar, but totally gone!

I am SO amazed at how easy it worked! Now…About that skunk in the live trap…  Anybody want him??? ;o)